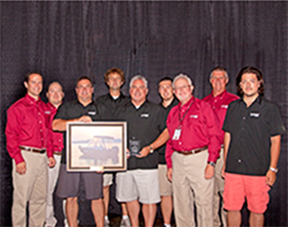 For the second time in a row, Lowe Boats awarded the title of World’s Largest Lowe Dealer to The Boat Warehouse of Ontario, Canada, during the annual Lowe Dealer Meeting. At an awards dinner held on Tuesday evening, September 10, representatives from Lowe presented The Boat Warehouse’s President Dave Mayhew and Managing Partner Dennis Reinsch with the honour and thanked them for their commitment to continually “raising the bar” for excellence.

“Once again, The Boat Warehouse has enjoyed an outstanding year, and we’re proud to present them with this award,” said Lowe Boats President Ben Cast. “The superior customer service and support they provide to our boaters, year after year, serves as a prime example of the commitment Lowe has made to raise the bar at every opportunity.”

Cast added, “We’re pleased to recognize the dedication that all of our dealers have for delivering the best possible boating experience. We see their commitment to building on success each day, and I would like to personally thank them for their passion and their hard work.”

Since its founding in 1991, The Boat Warehouse quickly grew to become a leading dealer of powerboats and fishing boats. Based in Kingston, Ontario, The Boat Warehouse has expanded to serve all of the greater Toronto, Ottawa, Belleville, Prince Edward, Barrie and Peterborough areas through its two locations. “Every member of The Boat Warehouse team is dedicated to providing great customer service, and their repair and maintenance services are truly world-class,” said Lowe Boats Sales Administration Manager Clint Starnes. “They’ve absolutely earned their success, and it’s great to see them receive this honour for a second year.”

Later in the evening, Cast continued to offer praise. “We’re excited to be working with such a strong network of dealers, sharing feedback and ideas on how we can always strive to serve Lowe owners better,” he said. “We applaud our dealers and wholeheartedly support their efforts.”

This year’s Lowe Dealer Meeting was held at the Cowan Civic Center from September 9–11. Throughout the event, a complete lineup of 2014 Lowe models was on display, including a sneak preview of several exciting new product introductions.

Dealers and Lowe employees were invited to tour the boats and the nearby Lowe manufacturing facility.